Yesterday evening, as I was peering into the red, furious face of my eight-month-old baby, just before she vomited with fury all over me, as a protest against going to sleep, I thought to myself, sometimes, being a mother is a tough gig.

For three and a half hours I patted and shushed as she screamed and flailed like a small angry gnome. And when, unable to bear the hysterical wailing, I relented and picked her up, she stopped crying, looked at me and laughed.

Downstairs, everyone was eating spaghetti bolognese – everyone except me – as my pint-sized slave-driver ensured my plate went cold. Baby wept. I wept. “Go the F to sleep,” I pleaded. I might as well have been smacking my head against a wall, for all the notice she took.

It’s karma, probably. I wasn’t a perfect baby myself – nor was I an angelic child. I remember going to the park with Tutti, Fluffy and her friend Terri and thinking it would be a good idea to push the swing as hard as I could, with Tutti standing unawares in front of it. It smacked her right in the head. She sent me to sit in the car in disgrace, where I watched Fluffy and Terri play without me, and I cried. 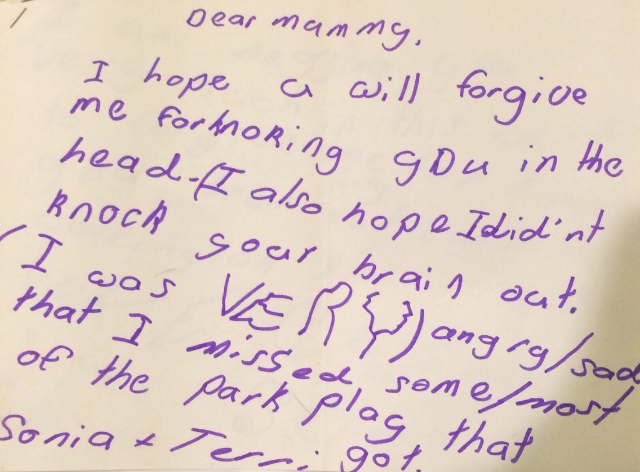 Anyway. This morning the baby woke up all sweetness and smiles. The air was frosty but the sun was shining and I breathed a sigh of relief that night time was behind me (for at least another 10 hours) .

The baby was at her typical daytime, happy, bouncy best – not least because the incredibly kind folk at Fisher Price sent me a Rainforest Jumperoo for her to try and I can stick her in it and actually get stuff done while she squeals with excitement at the music, bounces on her tiny feet, spins little spinny things around and watches the flashing lights. Every day I put her in it and it’s the same level of excitement (she’s like a goldfish…). Being able to detach her from my person and listen to her being happy rather than screechy has revolutionised my day indeed.

Smiles. Brought to you by Fisher Price.

But now it’s night time (again). I’ve just sat down again after being almost deafened by screaming (again) and thrown up on (again). I’m pining for day time already, for the smiles and the squeals and excitable bouncing.

And one day, I’ll tell her the story of how she was terrible at sleeping and just about drove me crazy. Just as Tutti reminds me of how I caused her morning sickness that ruined her European holiday. And smacked her in the head with a swing.

When I was four years old, a funny little baby came to live with us. My parents said I could name her whatever I wanted, and because I desperately wanted a dog, I named her Fluffy. Her birth certificate says ‘Sonia’, but we all still call her Fluffy, even at 30.

Fluffy was a screecher. It’s a wonder Tutti didn’t chuck her out a window. She screamed like a banshee morning, noon and night. I can still remember sitting on the green, foam, modular lounge, wrestling with baby fluffy as she pterodactyl-shrieked like a maniac, arching her back as if possessed. Even then, I loved my little sister. ‘There, there, Fluffy,” I soothed as I peered into her pink, furious face. “There, there.”

Fluffy has always been quite uncoordinated. She was never going to excel at any sport that required the catching of a ball (though come to think of it, neither was I). But she has been blessed with the most astounding creative spirit. I think the word for it is accomplished. She can sew like a master. She makes incredible clothes and hats and beautiful children’s toys; she is a brilliant and quirky illustrator and a wonderful writer to boot. If you have never seen the impressive body of work that is her Nun and Crocodile blog, then you ought to. Now. Run, don’t walk!

When Fluffy could first talk, she called me Little Mummy, and I always took great pride in my role as older sister, to look after her, and out for her and give her advice and a bit of tough love. Sometimes you need someone to tell you to shut up. I am very good at that. And I credit myself with gifting Fluffy with her very own spirit animal. The Honey Badger. Honey badgers are fierce. They are the most fearless creatures in the world. They are crazy. They do not give a shit.

I have always thought Fluffy was better looking than me. She is definitely more photogenic and has an enviably thin waist. I’m not even sure I have a waist.  But I have never, ever been jealous. I am quite proud of that fact.

Here is Fluffy, today, on her birthday, wearing a necklace I made for her.

Anyway, all that’s left to say is Happy Birthday little Fluffy. I have no doubt this next decade is going to be spectacular. Being in your 30s is the BEST. Until you turn 40. I hear 50’s good. Sixty’s the new 40 apparently. According to some of the ladies over at Advanced Style, being 80 is AMAZING!

My daughter Marnie entered the world with barely a squeak. Barely a whimper.

One minute everything was going marvelously. I was lying in bed feeling utterly relaxed, delighting in the little green light that flashed every 15 minutes indicating I could top up my epidural.

The next, there were suddenly too many people in the room. Too many furrowed brows. Hardly a sound but for the slowing beep of the baby heart monitor. I held my breath. I may have prayed.

Marnie was not having a particularly good time of it, thanks to an entangled umbilical that had strapped her in like a seatbelt. And for all my red-cheeked, vein-popping, labour-intense pushing, she was not going anywhere fast.

The kind-faced obstetrician wielded the forceps. Don’t worry, just the small forceps, he told me. He could have been using giant salad servers for all I cared – I was blissfully oblivious to whatever contortions my nether regions were performing, thanks to the spectacular spell of anaesthesia. All I wanted was to expel my little baby from her womb with(out) a view and for her to be okay.

And then, finally, she arrived; sweet and squashed, foaming at the mouth. Silent.

She was placed on my chest for all of two seconds, then whisked away to the Neonatal Intensive Care Unit to have life rubbed briskly into her pale pink body; to be oxygenated and aspirated and hooked up to monitors and tube fed.

Matty was no longer in the room since he’d followed Marnie to the NICU (quietly plutzing over his dramatic start to fatherhood). I lay in bed feeling shell-shocked and amazed that a human being had just been squeezed out of me.

I didn’t get to hold my baby properly for a couple of days. The first time I met her, a good few hours after her delivery, I peered down at her in her plastic crib and stood awkwardly, unsure of what to do with someone so small and vulnerable – with her toothpick limbs and bobble head. I almost felt I should extend my hand with a formal ‘pleased to meet you.’ After all, we had only just met, even if she had lived inside me for the most part of a year.

There were no sudden explosions of overwhelming love, or fireworks or thunderbolts. Rather, my adoration grew slowly, over days, over weeks; stretching, unfurling like a lazy dog in the sun.

The many faces of Marnie

And now, six weeks on, I’m amazed at how I’ve adapted. At how I’m able to leap out of bed at 3am and 6am – with a smile on my face because my baby needs me and she’s incredibly cute. I’ve become a morning person and a night owl and everything in between. I’m exhausted and jet-lagged and I don’t mind at all.

Being a baby = exhausting.

To see Matty with his daughter is incredibly special. He’s a wonderful father, as I knew he would be. And there’s no more devoted a big sister than Tiggy the dog, who looks concerned when Marnie cries, lies by her cot, gently nuzzles her ear and watches on adoringly with big, brown eyes. We’re a family now, and it’s inexplicably lovely.

I’m mesmerised by Marnie’s every sound (perhaps not the pterodactyl screech that breaks through the sound barrier of acceptable decibels and could probably shatter glass – but still.) I could stare at her face all day. Her expressions are hilarious. I guess no kid of mine had a choice but to be at least a little bit funny looking. 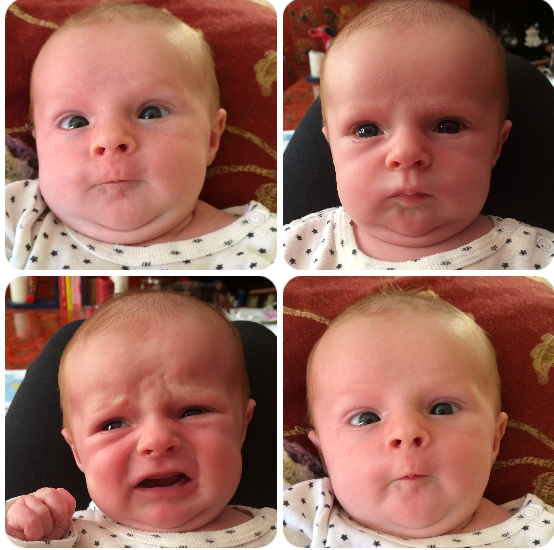 Funny faces. It’s in the genes.

Sometimes I have to pinch myself – to think that I’m a mother, with a blue-eyed, red-haired daughter. An impossibly sweet one, who fits perfectly inside a fine-china teacup. 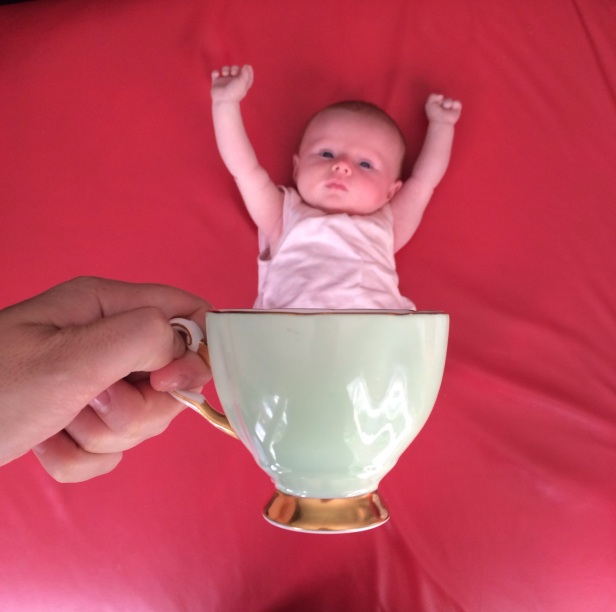