There’s no denying that social media has helped the world become a whole lot smaller. You can reminisce with strangers, forge virtual, international friendships, connect with anyone no matter how seemingly unattainable or powerful or famous they are.

And so it was, that somehow, I made contact with the inspirational photographer, author and blogger Ari Seth Cohen, whose blog, Advanced Style documents the stylish outfits worn by women over 60, for whom the street is their catwalk.

Tutti, Ari and Me in Paddington. Photo by instagram.com/pelle4scarpe

END_OF_DOCUMENT_TOKEN_TO_BE_REPLACED

It’s Friday today and I’m all out of puff. So you’re not getting much today. But what you are getting, is a picture of Tutti holding two tins of the very best and most delicious pickles in the world. 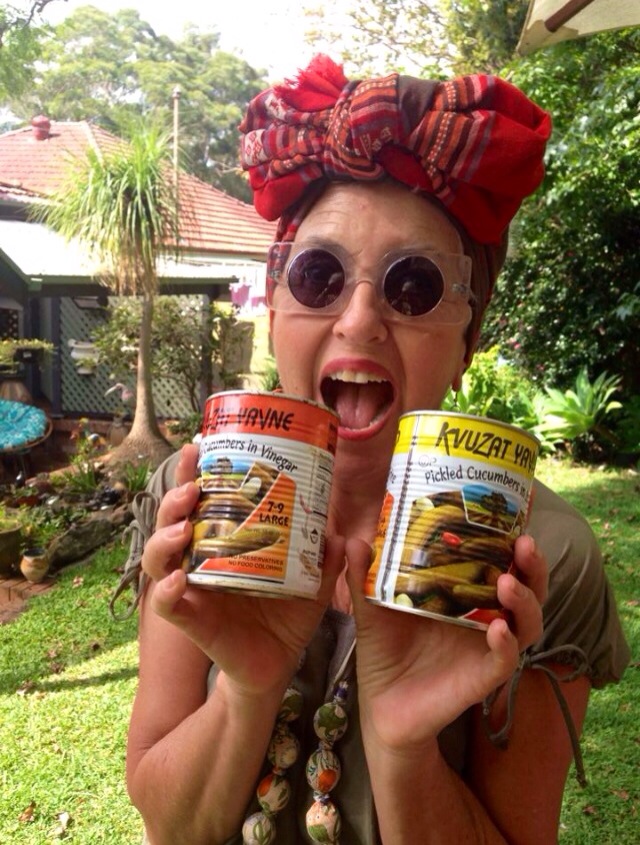 Now you could call me biased, because these pickles are made by my cousins on Kibbutz Yavne in Israel, who, in addition to their pickling-prowess are a talented bunch (inspirational speakers, teachers, children’s fashion designers, pottery geniuses and artists among them). Except that I am actually* a pickle connoisseur. I love pickles. I could chain-crunch through an entire jar of pickles, in one sitting, and I can guarantee that these are the best.

If you’re lucky, you can find these crunchy morsels of delight in your local supermarket Kosher aisle.

If you know me at all, you’ll know I’m a crazy dog lady.

END_OF_DOCUMENT_TOKEN_TO_BE_REPLACED

Friday nights in the Bennett household are typically raucous.

END_OF_DOCUMENT_TOKEN_TO_BE_REPLACED

There is almost nothing as disappointing as ordering food at a restaurant, expecting it to be delicious and having those expectations smashed into a trillion unpalatable pieces the minute your tastebuds decide to protest your culinary choices.
END_OF_DOCUMENT_TOKEN_TO_BE_REPLACED

Hello friends! A little bit of wisdom for  you today, courtesy of The Guru.

Now generally, we tend to think our Guru is a little bit loopy (much as we love him) but sometimes, he is surprisingly profound.

The Guru, doing what Gurus do.

“It is important what we think, because thoughts are ‘things’,” he says. “They are energy! If we worry, for instance, that things could go wrong, that illnesses may occur and people might die, we are actually giving breath to those probable realities. This is important. Don’t think for a moment that thoughts don’t matter and aren’t important! They are! Period.”

I actually believe in the power of positive thought. And although having a Guru for a father may have caused me to rebel against spirituality, I definitely have him to thank for my pretty rock-solid upbeat disposition.

And if you ever had even the tiniest inkling of doubt about the power of belief, this might change your mind. The Guru, at 64, has recently developed a humungous pimple on his cheek (almost as if there were another Guru trying to get out!) which is PROOF that he has actually manifested the age of twenty in his consciousness. Problem skin and all.

N.B. If you’re wondering what that brown mark is across The Guru’s leg, it’s a scar from when he decided to stand on a rickety, antique chair (not a ladder) to fix the bird feeder for his beloved avians, high up in the Jacaranda tree. Of course, he crashed to the ground, gashing his leg in spectacular style, proving that sometimes, Gurus are humans too. (And very silly humans, at that).