This is a story about the day The Guru, (who as well as being an enlightened spiritualist also happens to be a very talented graphic designer), took his photoshopping talents a step too far. You see, it was the night before he was about to go to Bali for a holiday with Tutti and Fluffy, and he had only just realised that his passport had expired. Yes: it had expired That. Very. Same. Day.

Now, while everybody knows that it is actually impossible (read: IMPOSSIBLE) to get a new passport turned around in less than 48 hours, The Guru had no doubts that he would be on the plane on time. Why? Because one of the philosophies that he lives by is that ‘What you believe, you create’ – and The Guru believed with every fibre of his fluffy-haired being, that he would be boarding a plane to Bali the following afternoon, with a renewed passport in his hand.

a) Pray
b) Make sure he had all the correct passport renewal forms filled out?
c) Go straight to bed so he could be up bright and early, the second the passport office opened?

Answer: None of the above.

Instead, he stayed up until 1am, manically photoshopping his passport picture.

To this day, we will never know why The Guru tried to photoshop himself. It was a moment of vanity. Or perhaps insanity. Probably, it was a combination of both. But we do know two things.

The first, is that this is what the Guru normally looks like.

Friendly. Fun. You would never cross the street if you were passing him late at night. He doesn’t even walk like a normal person, he half-bounces, half-floats, and as he does so, he emits rainbows and a warm golden light and sweet chirping birds flit behind him in his wake.

The second, is that by the time The Guru was done, he looked less like Paul Bennett, and more like Paulina la Frou Frou, a strange, poe-faced tranny who works nights at a cabaret probably called The Pink Poodle or The Fabulous Fanny.

You will not be surprised to hear that when The Guru got to the passport office the following morning, the very second the doors opened, the officer took one look at him, one look at the pink-haired, slim-faced creature in the photograph, and with a smirk said, “No mate, this is not gonna cut it.”

But does the Guru think for a minute there’s even a small chance he might not get his passport? Of course not. One of his other life philosophies is to ‘Act As If’. (Which is much the same as What You Think, You Create). So, with his curly silver mullet flapping softly behind him, he flew out the door of the passport office, and into the nearest post office to have a new picture taken.

Unfortunately, it was raining that day. And so the Guru’s glorious mop of shining curls were damp, and flat, and sad and dejected. They refused to be fluffed. Add to that the strain of a clock ticking down just a few hours until he was due to board a plane with his family, and all the panic, the madness, the worries of the world were etched on The Guru’s normally glowing face.

Now, if you saw someone who looked like the Guru in his actual passport photo, you would cross the street. In fact, you would probably run, screaming.

This is what he has to live with for the next 10 years.

This is what the Guru would look like if he was 175 years old and wanted for criminal activity. 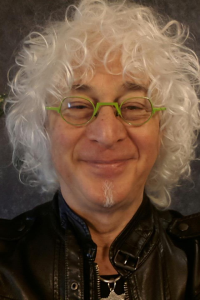 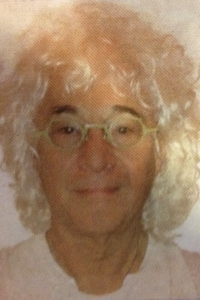 Now I won’t tell you the whole story, because one day the Guru will tell it in full, in his book, which promises to be a future bestseller. But what I can say, is that just 3 hours later, he had his new passport in hand, and was happily boarding his flight, as scheduled. As expected.

Which just goes to show that a little bit of optimism goes a very long way.